Over the course of their 15-song set, the band played a handful covers and invited numerous guest performers onstage with them, including Brandi Carlile, Maggie Rogers, and Mavis Staples.

Among covers including Simon & Garfunkel’s “The Boxer” and The Band’s “The Weight,” Mumford & Sons invited Phoebe Bridges onstage for a rendition of Radiohead’s In Rainbows classic, “All I Need.”

Cancer recovery may have slowed Elvis Costello down a bit - and caused him to cancel a handful of European concert dates ... but it couldn't stop him from releasing a new album, with his long time backing band, The Imposters, and touring the states (he plays DAR Constitution Hall on November 4, 2018)

The new album, titled LOOK NOW is due out October 12th on Concord Records and is the first album Costello has made with The Imposters since the 2008 release of ‘Momofuku’ and his first new album since the acclaimed 2013 Roots collaboration, ‘Wise Up Ghost’

“I knew if we could make an album with the scope of ‘Imperial Bedroom’ and some of the beauty and emotion of ‘Painted From Memory’, we would really have something”, said Costello

And here's the full track listing for Look Now:

3. Burnt Sugar Is So Bitter

16. You Shouldn’t Look At Me That Way

Its no secret that the Arctic Monkeys like The Strokes - Alex Turner and crew have been belting out some great Strokes covers over the years- including Reptilia and Take It or Leave It ... and at a recent show at Forest Hills Stadium in Queens, NY - they added another song to their Strokes portfolio - covering Is This It.  Check out the videos:

Take It or Leave It:

McCartney, who had announced the free show earlier yesterday on Twitter, wooed those fans lucky enough to snag a ticket with Beatles hits ranging from “Magical Mystery Tour” to “I Saw Her Standing There.”

The original Cavern Club, where the fab four were first discovered by manager Brian Epstein, closed in 1973 and was ultimately demolished. Luckily, the original bricks were used to construct the new venue that now stands in its place.

This is the first time McCartney has played the club since performing there in 1999. Check out footage from The Daily Mail of last night’s historic event:

McCartney’s new album, Egypt Station, is due for release via Capitol Records on September 7.

The first demo recording on which the late David Bowie ever laid vocals has been rediscovered by a former bandmate.

Bowie, then the 16-year old saxophonist for his first band, the Konrads, was asked to contribute backing vocals to the demo in August 1963. The demo, titled “I Never Dreamed,” was recorded at Decca’s West Hamstead studios and initially rejected not only by Decca, but by Rolling Stones manager Eric Easton as well.

Long thought to be lost forever, the recording was unearthed by former Konrads drummer David Hadfield while moving in the 90s and kept secret until now. The demo is expected to fetch £10,000 (about $13,000) at auction in September. Check out a 12-second clip of the artifact below.

Tom Petty passed away unexpectedly last fall, leaving behind almost fifty years of diverse recorded material, ranging from the southern garage rock of his early band Mudcrutch to the pop masterpieces released with his Heartbreakers.

Petty’s hugely prolific catalog is about to be augmented even further by the addition of a 60-Song Boxset curated by his family and bandmates and consisting of unreleased songs, outtakes, and rarities.

The boxset, titled An American Treasure, is due for a September 28th release and is preceded by the previously unreleased “Keep A Little Soul,” a song that finds Petty in near perfect form. Check it out below, accompanied by a compilation of old performance footage and behind-the-scenes home movies.

Billy Joel is in the middle of an epic run of shows at New York's Madison Square Garden.

During the run of shows, Billy has had some cool guests - like Paul Simon and Miley Cyrus - But at his 100th (!) show on July 18, 2018 -  Billy Joel brought along a pretty amazing guest to the storied arena- Bruce Springsteen!

Check out the BOSS and the PIANO MAN belting out versions of Tenth Avenue Freeze Out and Born to Run below!

As if a touching duet with Jack Johnson wasn’t enough, Pearl Jam brought yet another surprise guest onstage during their headlining set at Portugal’s NOS Alive festival on Saturday: Nashville’s very own Jack White.

White, who performed at the festival prior to Pearl Jam’s set, joined the band onstage to close the show with a rendition of Neil Young’s “Rockin’ In The Free World.”

This is the first time White has performed alongside Pearl Jam since their joint performance of “Of The Earth” during band’s surprise show at Third Man Records in 2016.

Paul Simon has been traversing North America and Europe since May on his farewell tour appropriately named “Homeward Bound.” As Simon barrels through the British Isles (he plays a show in Dublin tonight and another in London tomorrow night), the famed Simon & Garfunkel co-songwriter has announced one final solo LP, his fourteenth, titled In the Blue Light.

The 10-track collection, scheduled for a September 7th release on Legacy Recordings, consists entirely of reworked renditions of songs from Simon’s extensive back catalog, specifically songs that Simon himself “thought were really good songs that didn’t get much attention when they first came out.”

The album, produced by Simon and Roy Halee, will include contributions from the likes of Wynton Marsalis, guitarist Bill Frisell, and drummers Jack DeJohnette and Steve Gadd. Watch a brief video with footage from the album making process below:

In the Blue Light Tracklist:
01. One Man’s Ceiling Is Another Man’s Floor
02. Love
03. Can’t Run But
04. How the Heart Approaches What It Yearns
05. Pigs, Sheep and Wolves
06. René and Georgette Magritte With Their Dog After the War
07. The Teacher
08. Darling Lorraine
09. Some Folks’ Lives Roll Easy
10. Question for the Angels

Mounted on an Indian Scout FTR750, Pastrana jumped 143 feet over 52 crushed cars, 192 feet over 16 Greyhound buses, and finally 149 feet to clear the fountain in front of Caesars Palace hotel and casino.

Pastrana even donned his own red, white, and blue costume in honor of Knievel, cape and all. Knievel, who passed away in 2007 at age 69, crushed his pelvis and broke several other bones attempting the same fountain jump on New Year’s Eve in 1967.

Pearl Jam played a headlining set at Belgian multi-day festival Rock Werchter on Saturday night and brought with them a cast of guest performers including none other than singer-songwriter Jack Johnson.

Eddie Vedder invited Johnson onstage to cover John Lennon’s classic “Imagine” after taking some political jabs, suggesting that the audience light up their phones and sing along to show what a “really big crowd in harmony looks like.”

Other guest performers included MC5’s Wayne Kramer, Soundgarden’s Kim Thayil, and Fugazi’s Brendan Canty who joined Pearl Jam early in the set for a version of MC5’s signature “Kick Out The Jams.”

We've seen weddings at Foo Fighters shows, guys dressed like KISS playing guitar on stage with the band at Foo Fighters shows, heck - we've seen Dave 'Rick Roll' an entire stadium - but when the band openned their 2018 North American Tour at Merriweather Post Pavilon on 7/6/18, one fan had the most epic request Dave had ever seen - to come on stage and shotgun a beer with him for her birthday .... so did Dave oblige?  HELL YEAH he did ... check it out ->

Well, it took 23 years - but the Foo Fighters have finally played Merriweather - and it is a good thing that the Columbia, MD venue recently underwent some renovations  - including a raised roof - cause Dave Grohl and co. certainly brought the ROCK last night - before heading 'downne oshun for some jumbos'

Want to see more? Check out the full gallery HERE 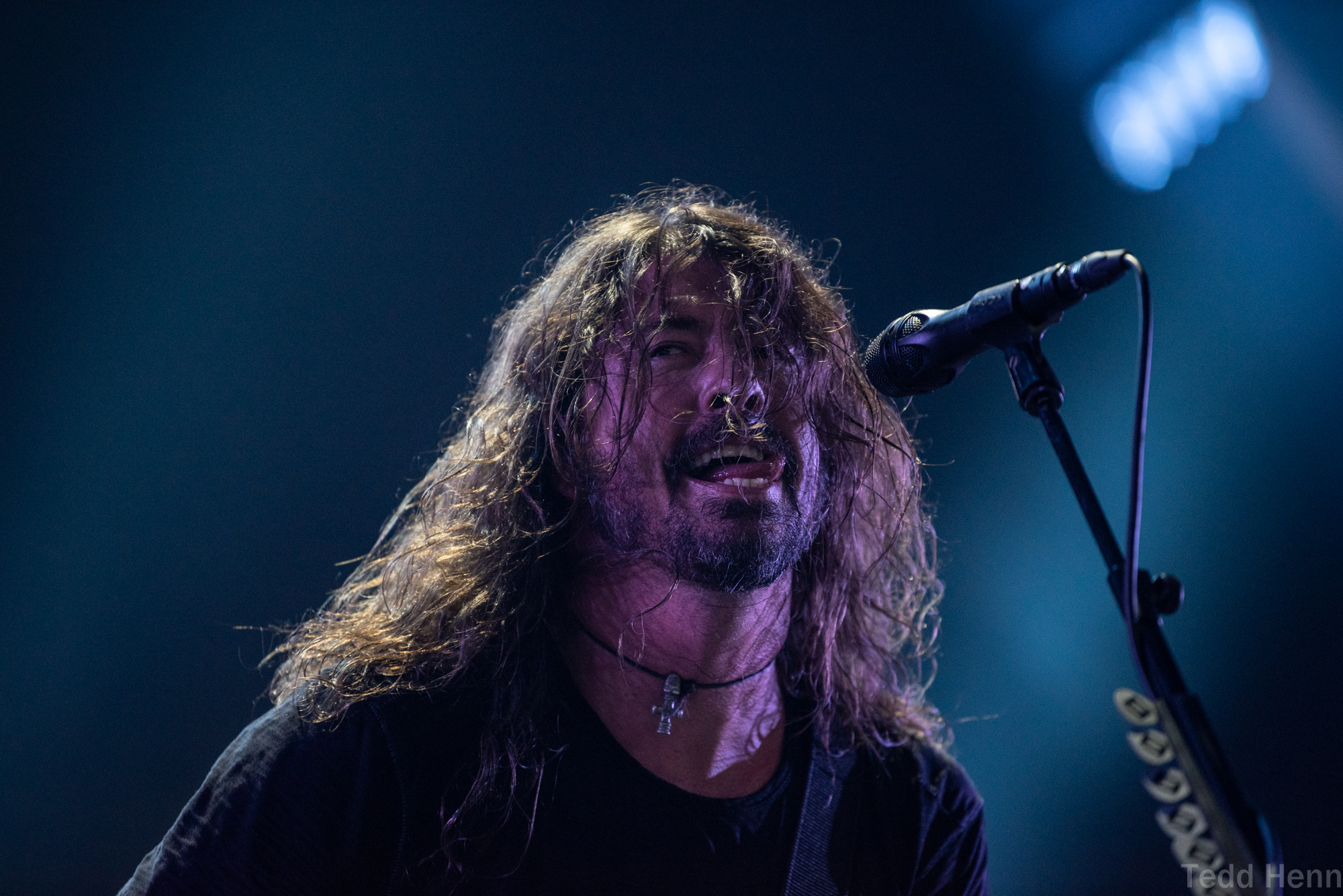 Here's the career spanning set list - that had a little bit of everthing for the old school and new school fans:

4.  The Sky is a Neighborhood

10. Under My Wheels (Alice Cooper cover)

11. Another One Bites the Dust (Queen Cover)

14. Under Pressure (Queen cover with Dave on drums!) 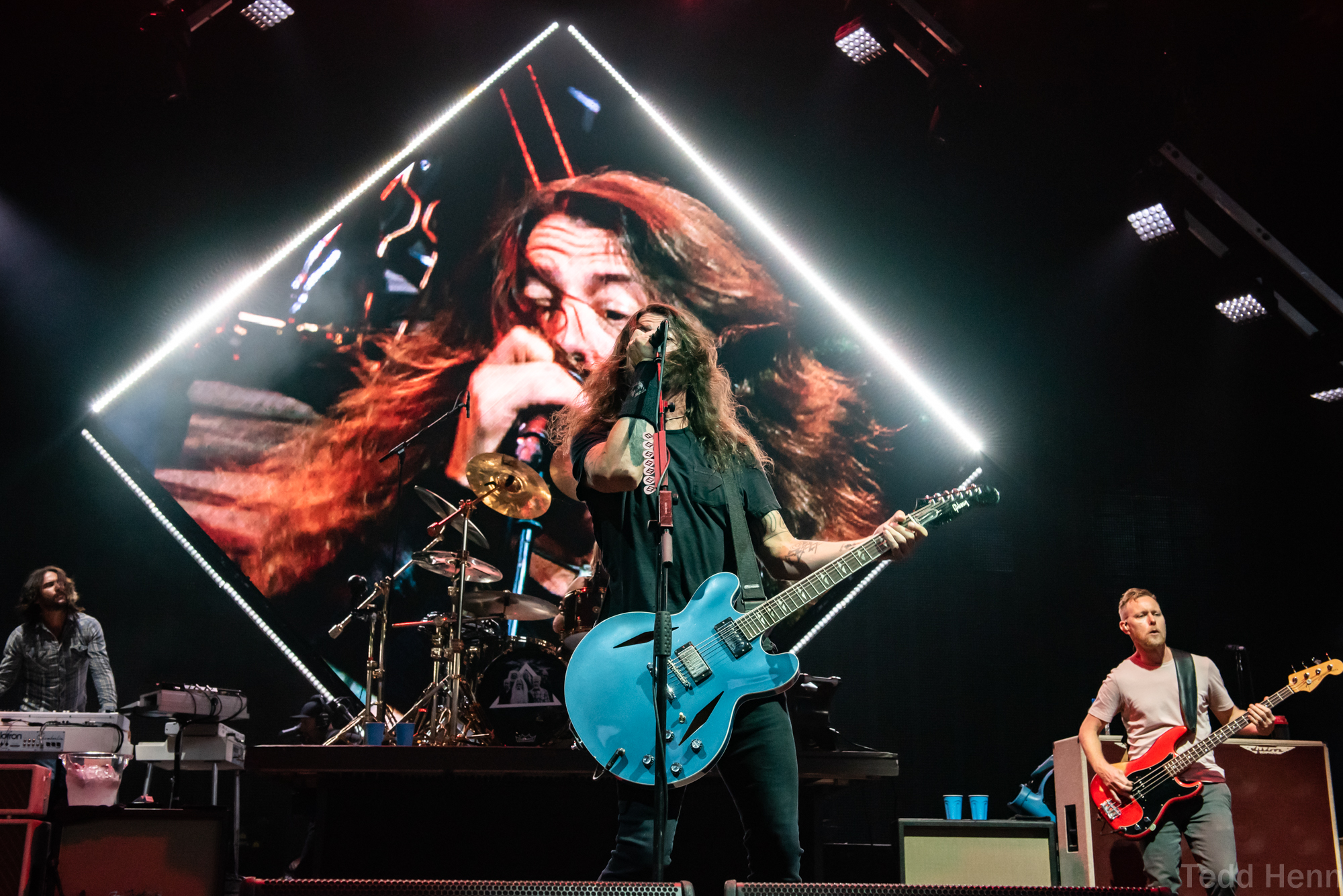 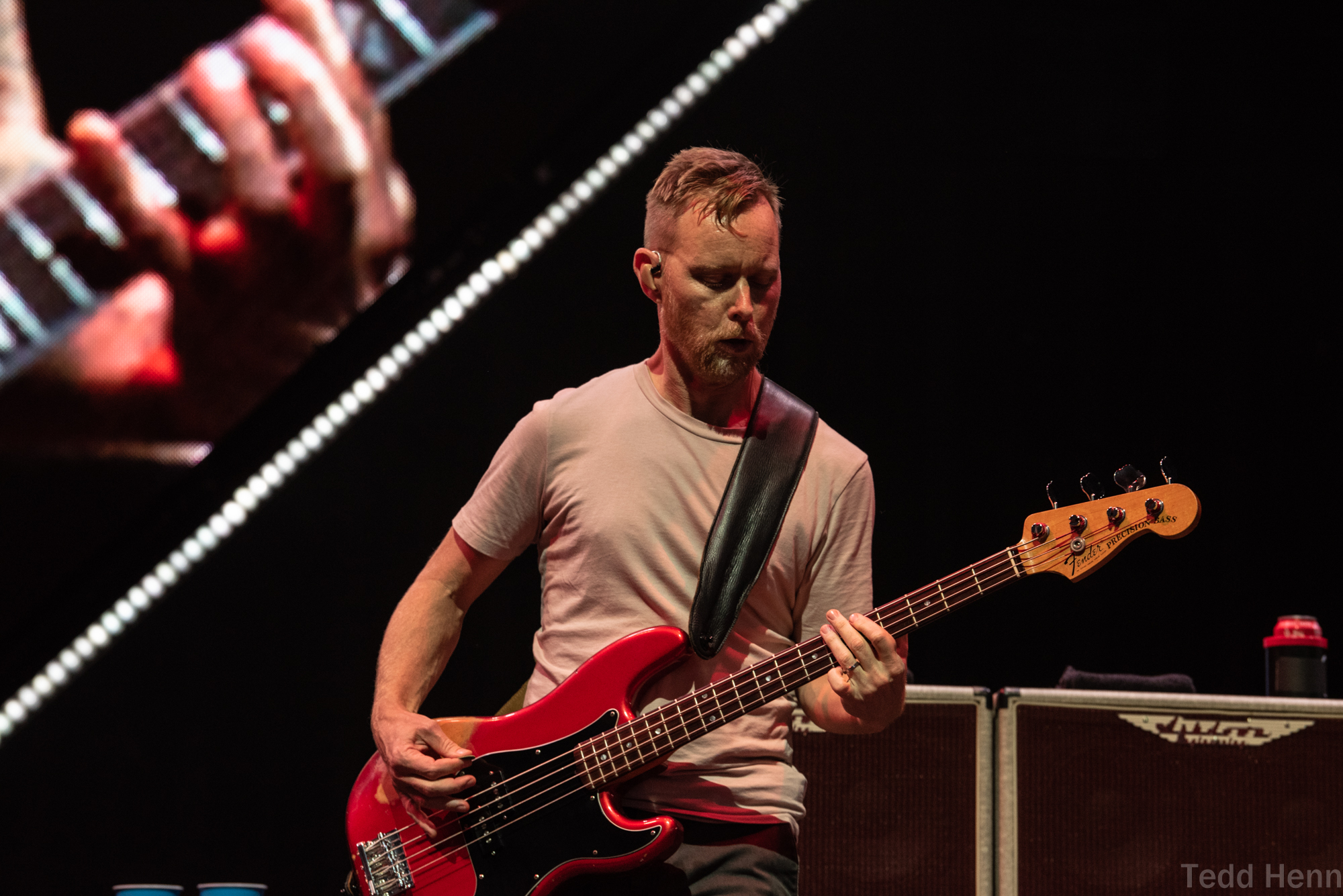 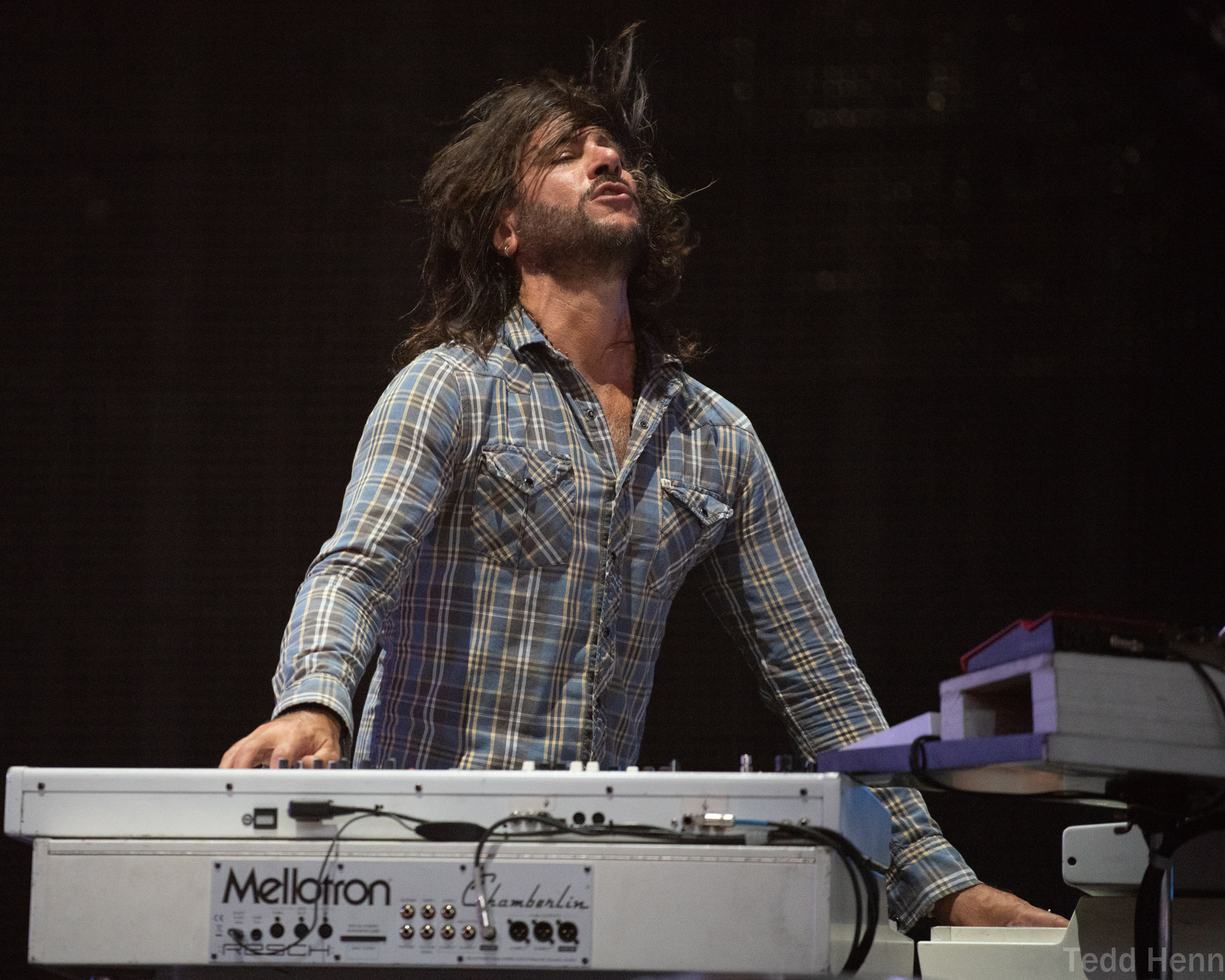 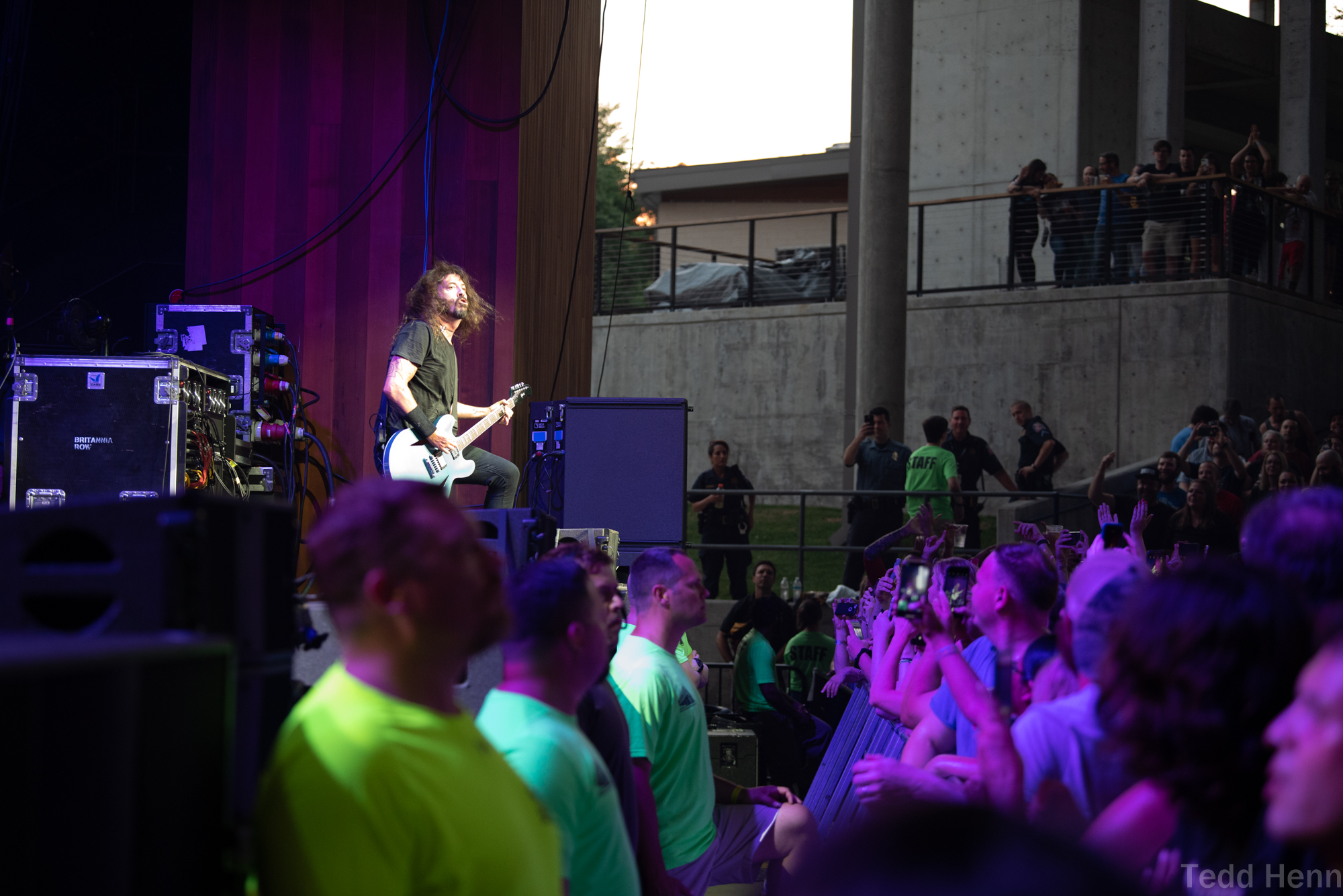 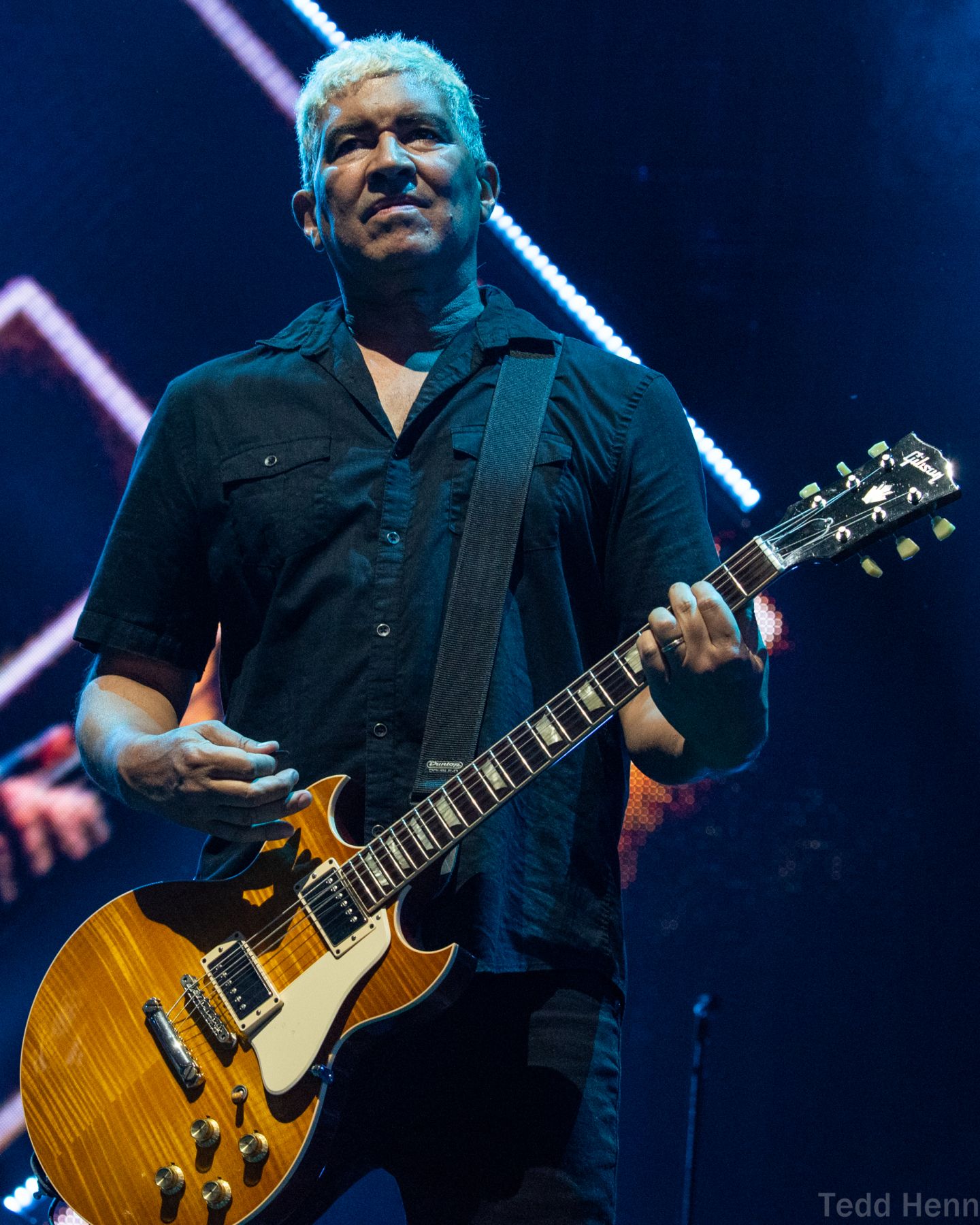 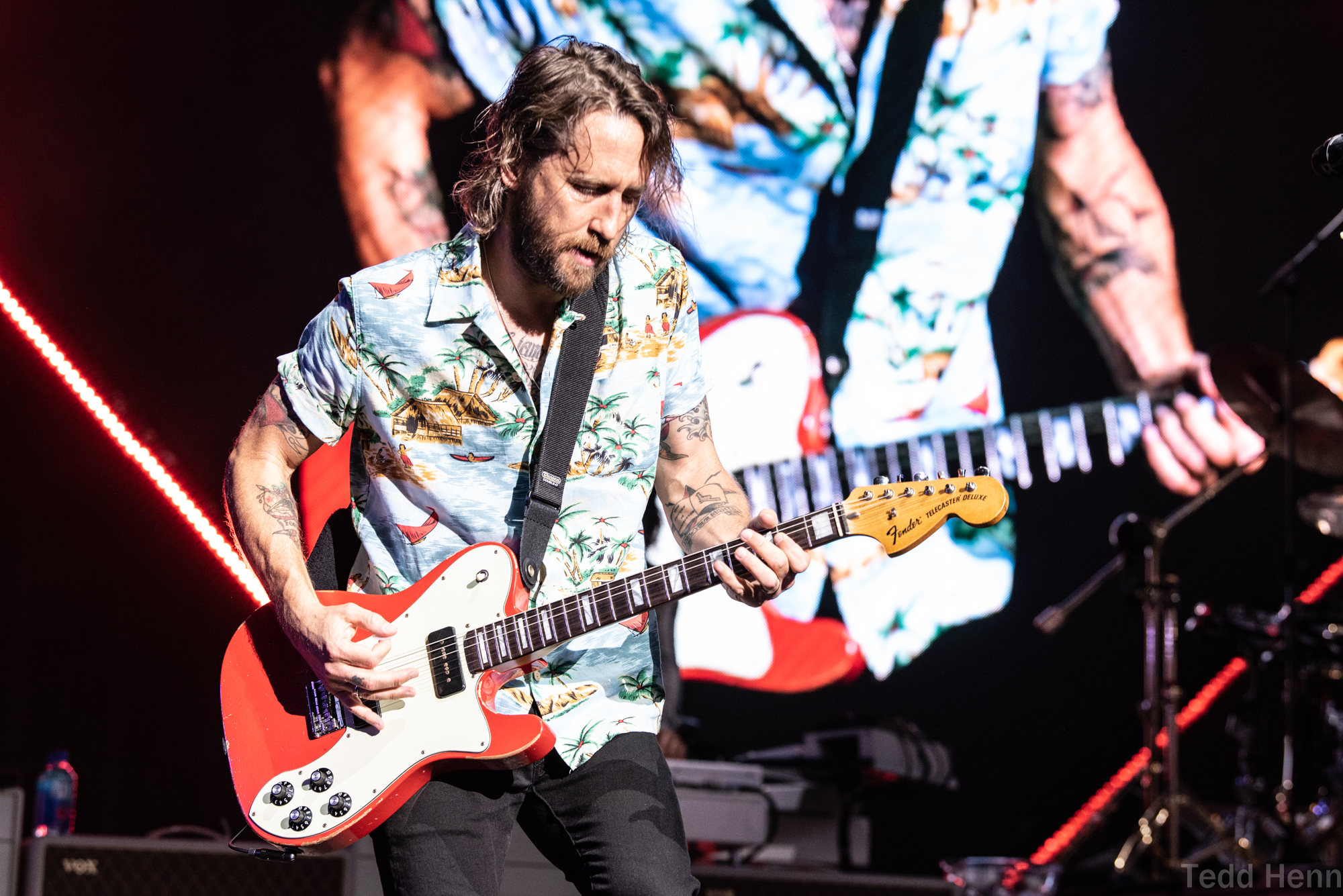 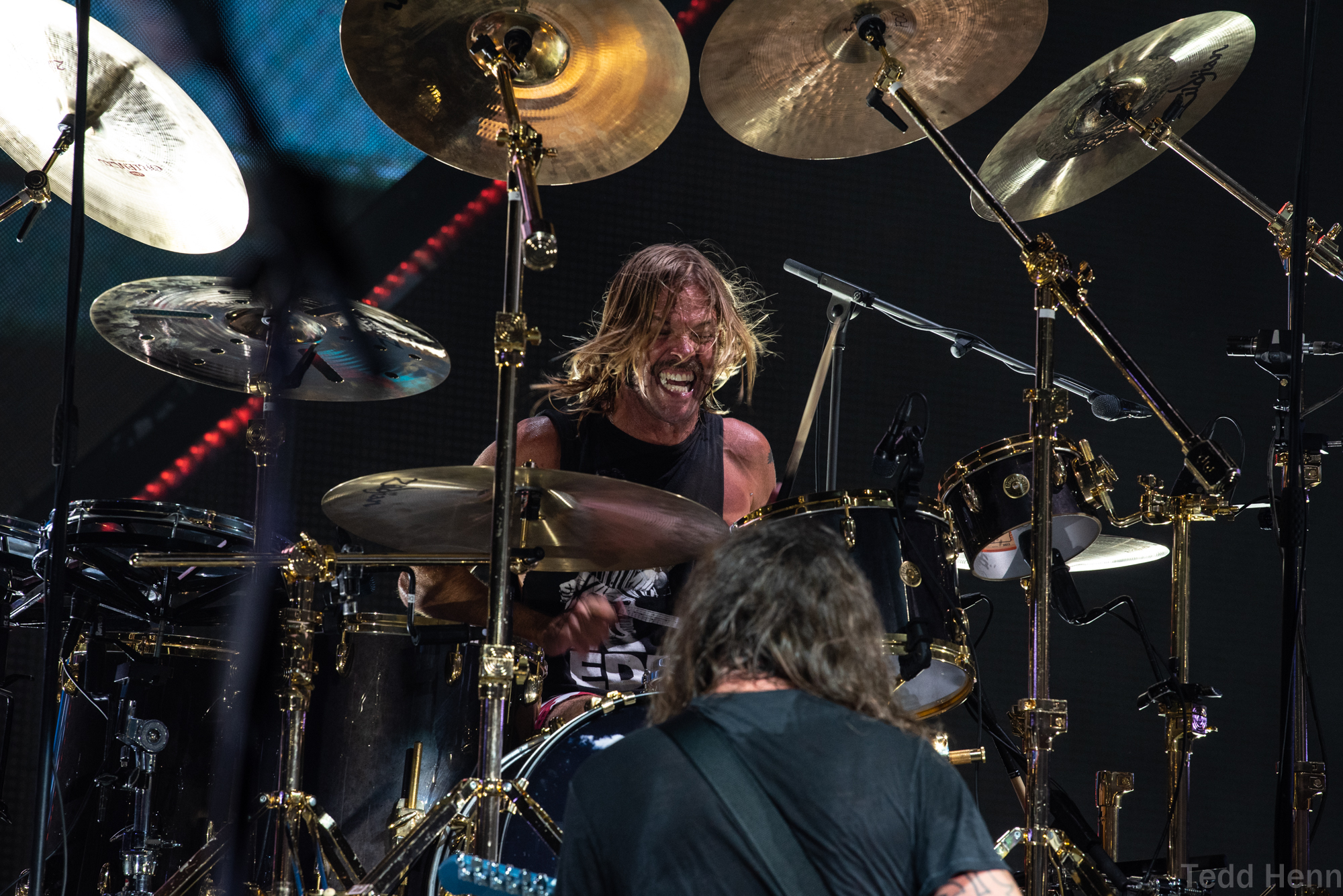 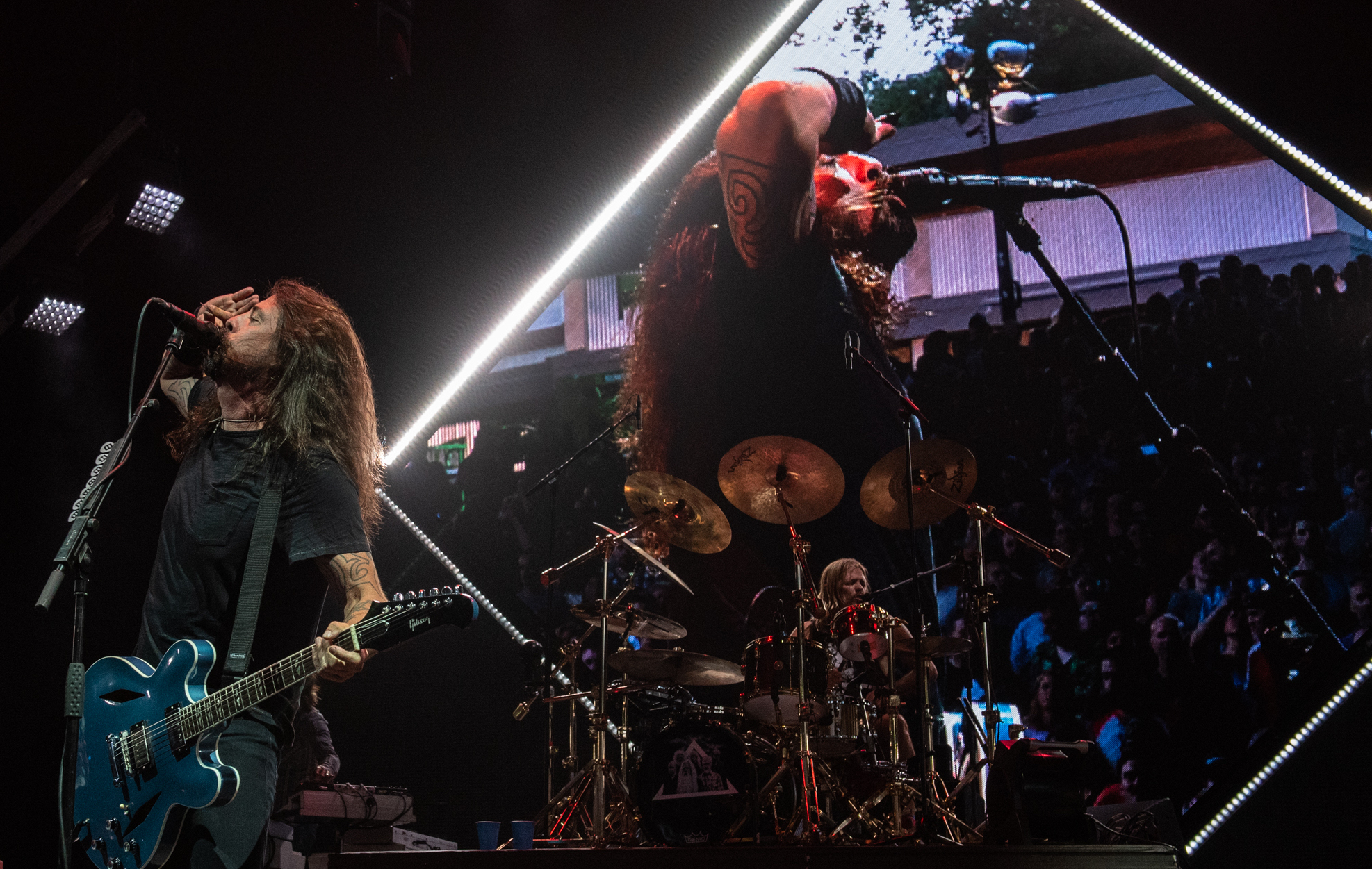 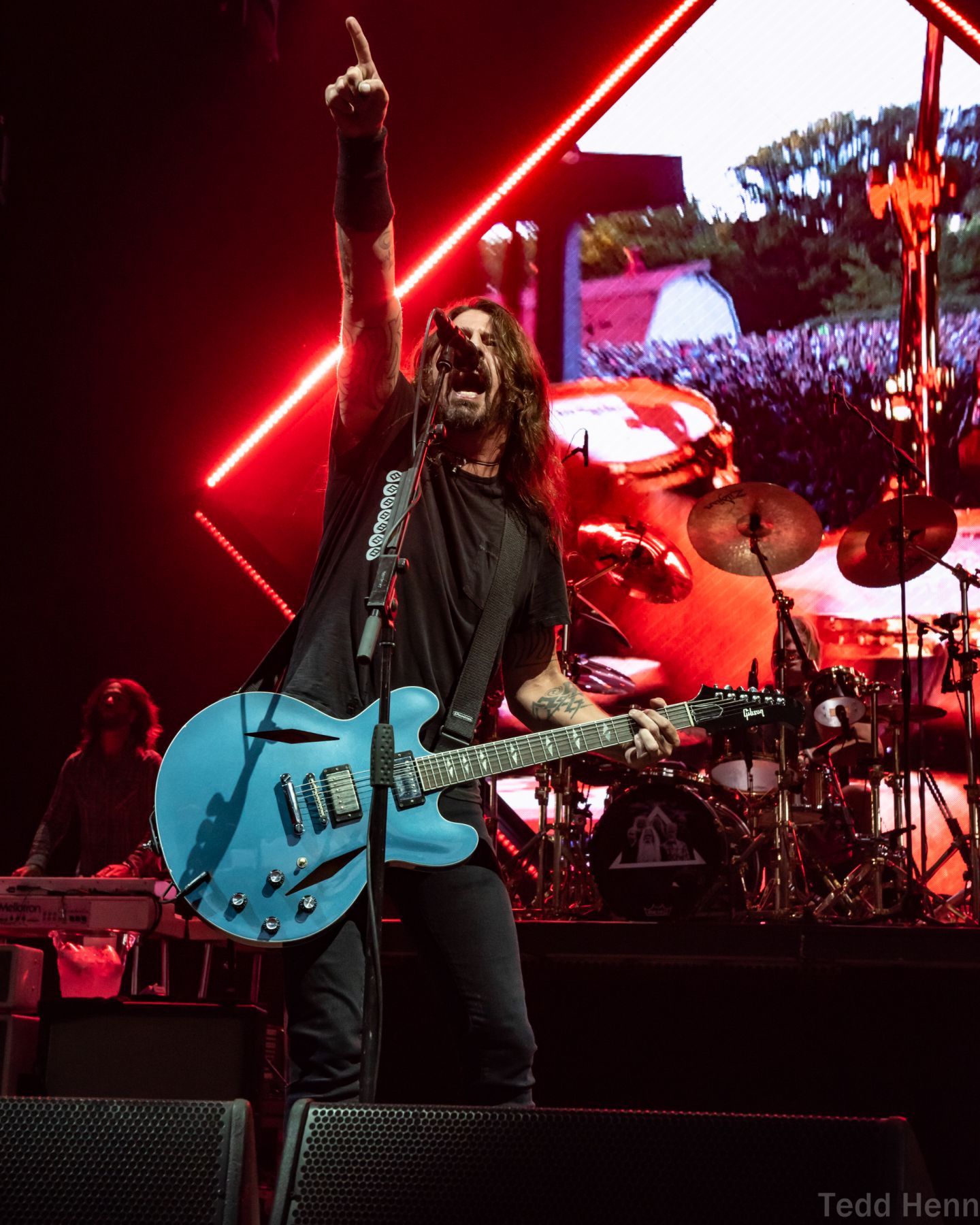 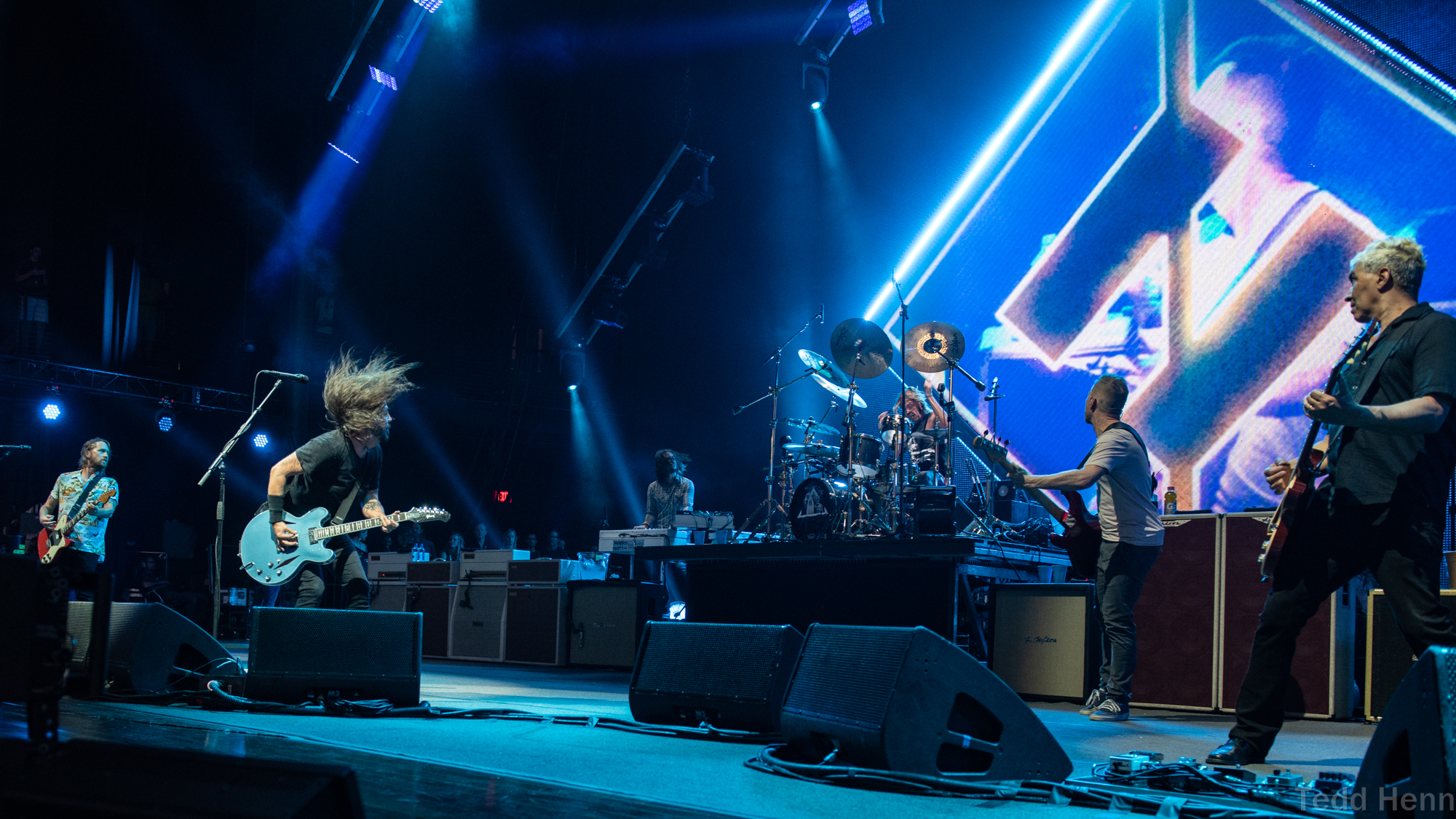 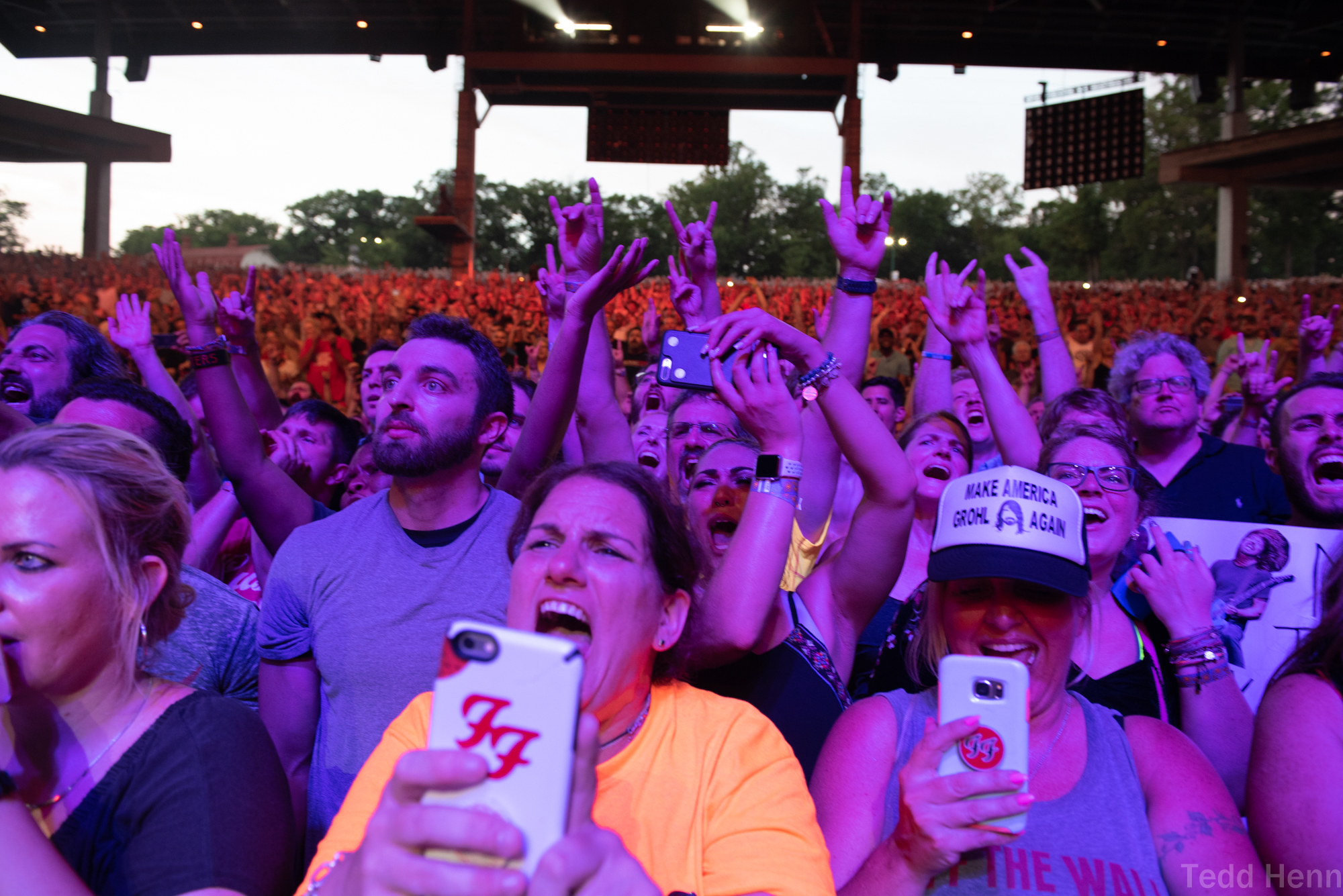 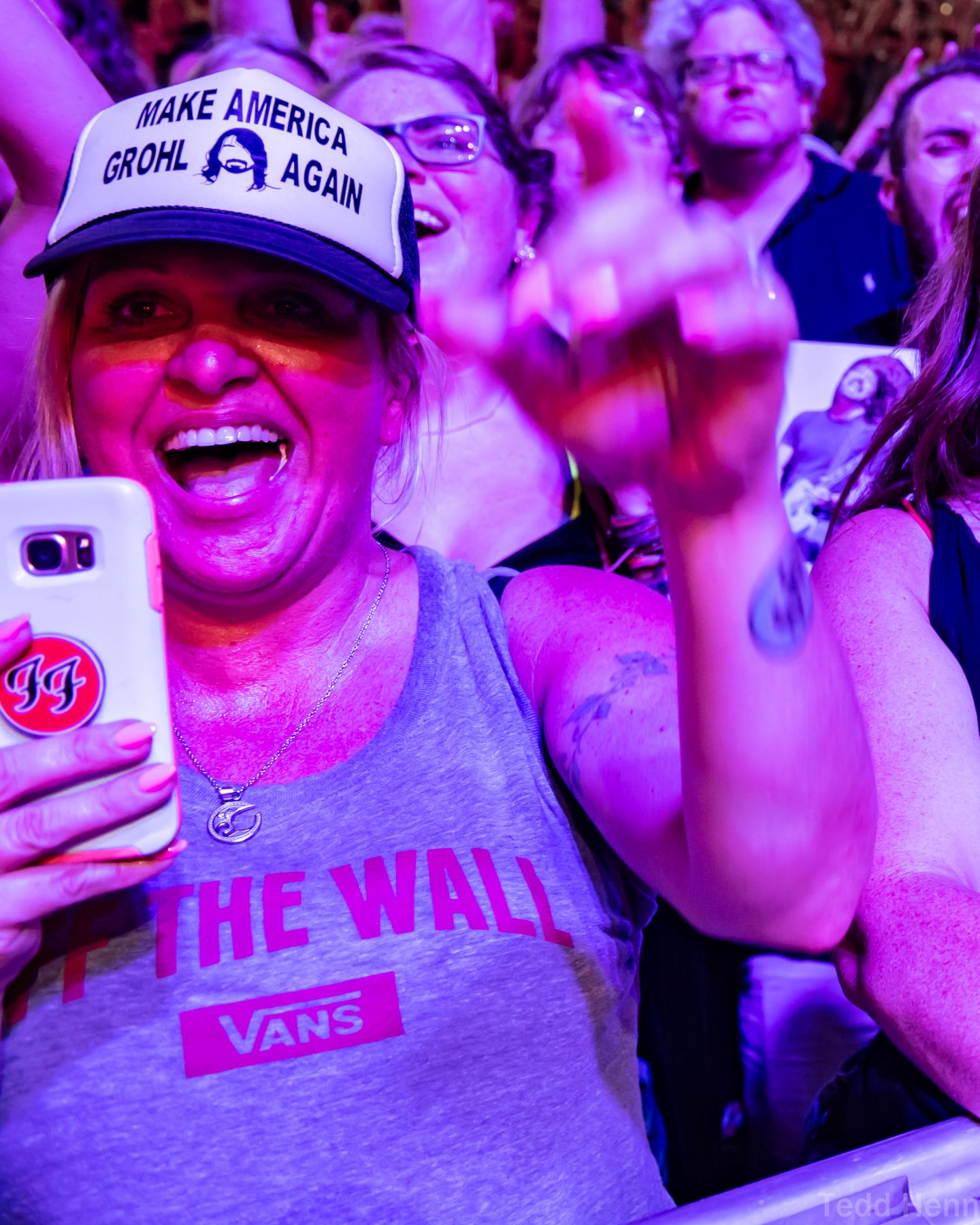 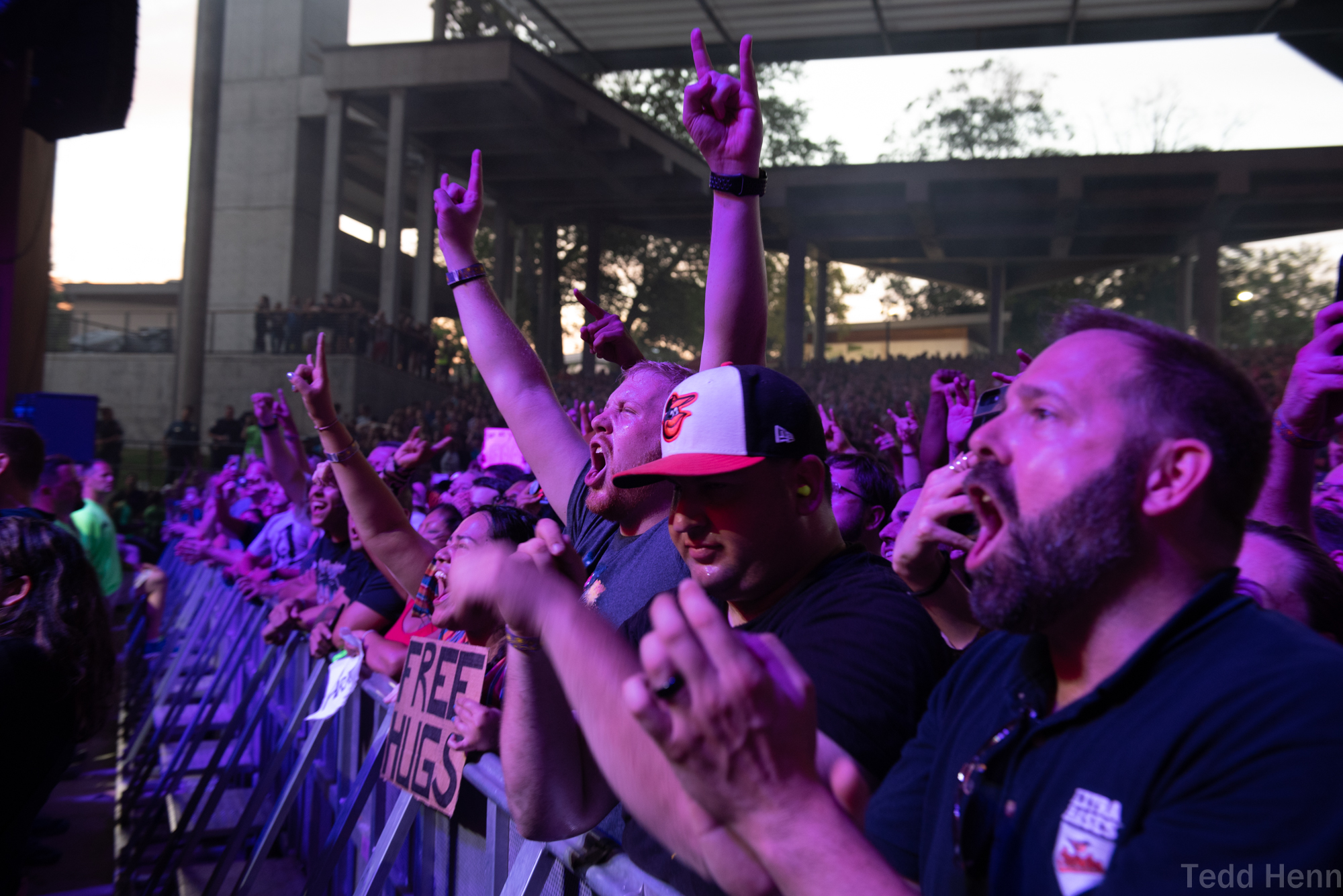 U2 and Bono are arguably the most politically active musicians in the scene today - so it should come as no surpise that the band paused a recent show in New Jersey to address the horrible tragedy that took place at the Capital Gazette, when 5 staff members were murdered on June 28th.

Before performing One - Bono  spoke of journalists - saying we need them ... and specifically to the staff at the Gazette - There is no THEM - there is only US.