When you play two sold out shows at The Anthem in DC, you have to find some time to kill in between them ... and that's just the position Jack White found himself in this week.

Monday - Jack took headed to Baltimore and watched the O's take on the Nats at Oriole Park at Camden Yards.

Jack White taking in the battle of the beltways at Camden Yards today... Think they were playing Seven Nation Army when this was taken? #Repost @ramsheadlive ??? spotted a thirdman in birdland! ???? #baltimore #orioles #birdland #jackwhite #thirdmanrecords #oriolesmagic

And yesterday, he decided 2 DC shows weren't enough and decided to head to Woodrow Wilson High School (Ian McKaye's alma mater no less) and play a lunch time pop up show for the students and faculty.  The show lasted 45 minutes, during the kid's lunch hour and culminated with Jack being joined on the 'stage' by the students as he blistered through the White Stripes classic, Seven Nation Army ...

A post shared by Jack White Live (@officialjackwhitelive) on

David Byrne's American Utopia tour rolled through Portland, Oregon recently - and before his show at the Keller Auditorium - the Talking Head stopped into the Alibi Tiki Lounge to unwind and sing some karaoke .... his selection?  When Doves Cry by Prince

It's been a minute since we've heard from our favorite shore girl, Maggie Rogers - but she surfaced with some new music this week - and its a banger - produced by fellow DMV native, Rostam of Vampire Weekend.

Check out the song, Falling Water, below - along with a hand written note she posted to twitter explaining the song and how it relates to the ride her career has been on the past 2 years.

Friday May 18, 2018 - marks the one year anniversary of Chris Cornell's passing, and at a recent concert in Los Angeles, U2 paid tribute to the late singer - with a cover of the Soundgarden classic- Black Hole Sun.  Check out the clip below.

Dave Grohl has set the bar pretty high for epic shows ... playing with a broken leg, inviting fans on stage to jam, people getting MARRIED at his shows ...

But this past weekend, at Notes and Words ( a benefit show for UCSF Benioff Children's Hospital) - the rock god took it down a notch but still gave a kick a$$ show - during his acoustic performance  - he brought his daughter Violet onstage with him - who nailed the vocals on a cover of Adele's When We Were Young ... Not enough - Grohl ended the set with a cover of his own Foo Fighters song, The Sky is A Neighborhood, with Violet on vocals and another daughter, Harper, on drums! Dude ... what are the Foos gonna do when they play Merriweather Post for the first time ever on July 6th ?!?

“I dance like this because it feels so damn good...If I could dance better, well, you know that I would.”

Dance moves or not - David Byrne and his 11 piece ensemble blazed through an incredible set Saturday night at The Anthem  ... yes - they played Burning Down The House, as well as several other Talking Heads songs, an emotional cover of Janelle Monae's Hell You Talmbout, and other jams from Byrne's collaborations.

Byrne claimed earlier this year that the tour was going to be his most ambitious since the Stop Making Sense shows (as well as his first solo tour since 2009).  Despite a minimalist stage setup - no amps, no cords, no shoes (!) - the show lived up to the hype and then some

Check out some pics, video, and setlist  of the show below ... if you missed this show or maybe you were there and want to see it again, David Byrne's bringing his American Utopia Tour back to our area - with a show at Merriweather Post on July 28th! 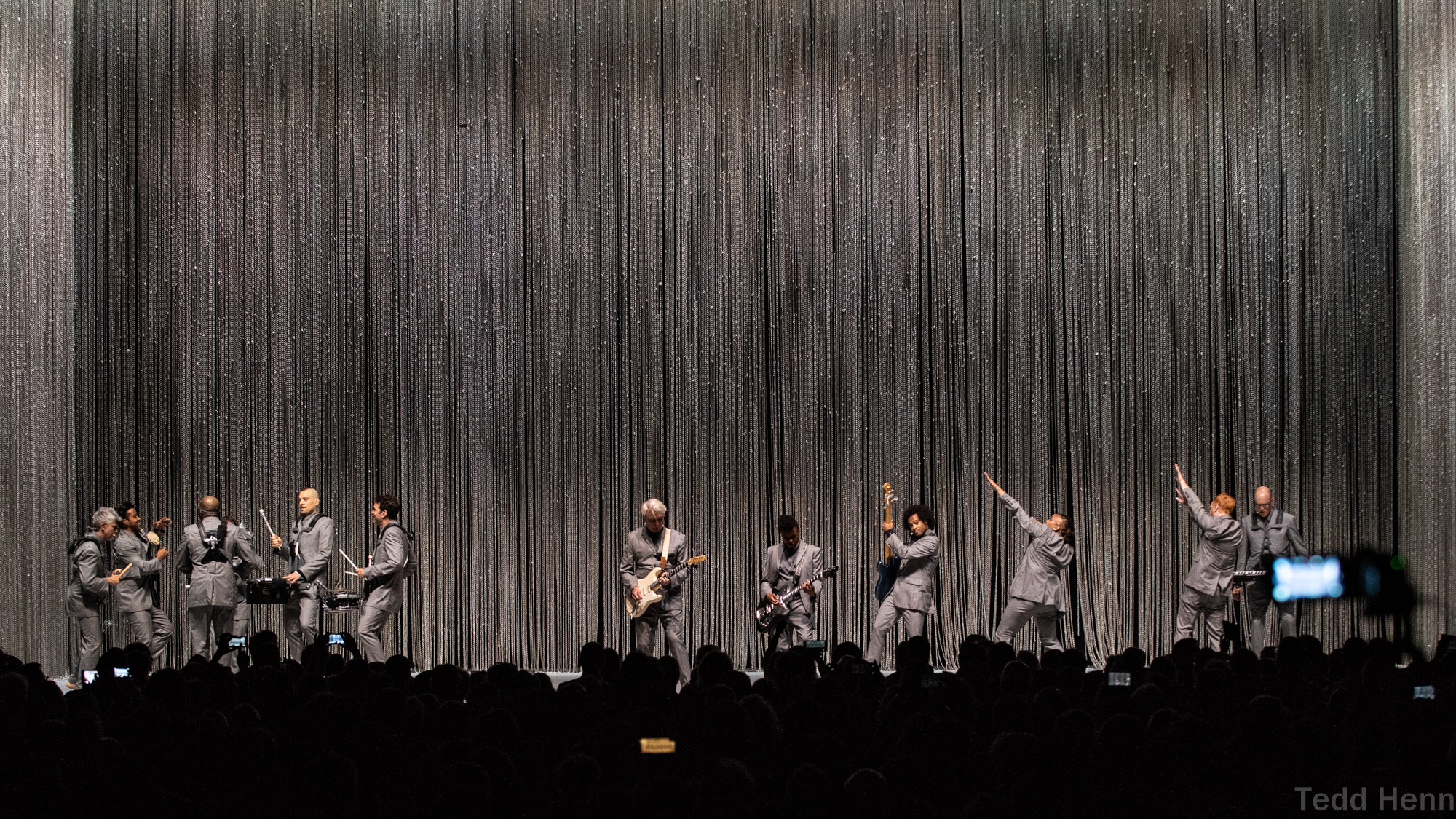 5. I Should Watch TV

7.  Everybody's Coming to My House

8. This Must Be The Place (Naive Melody)

9. Once in a Lifetime

15. Everyday is a Miracle

18. Burning Down the House 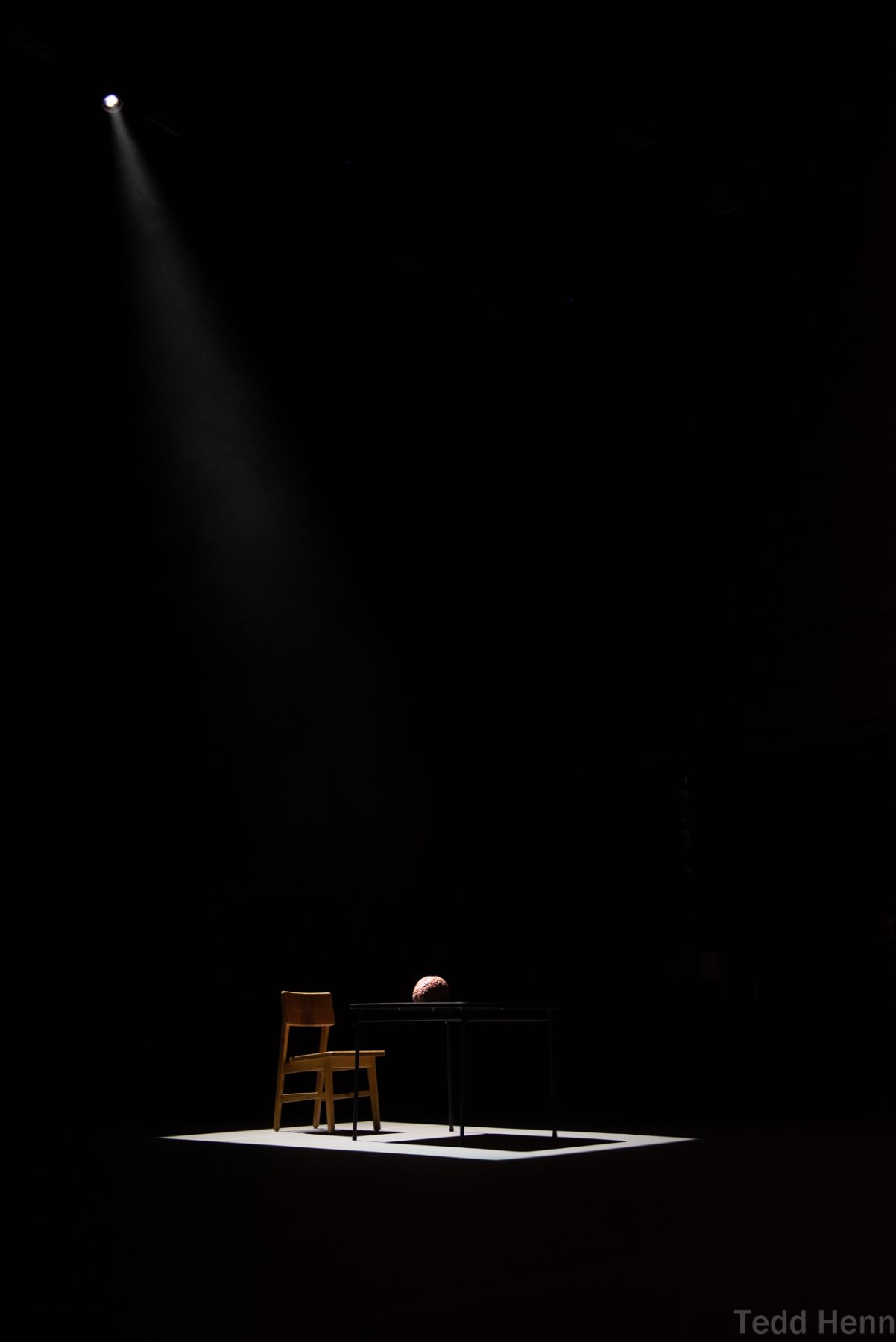 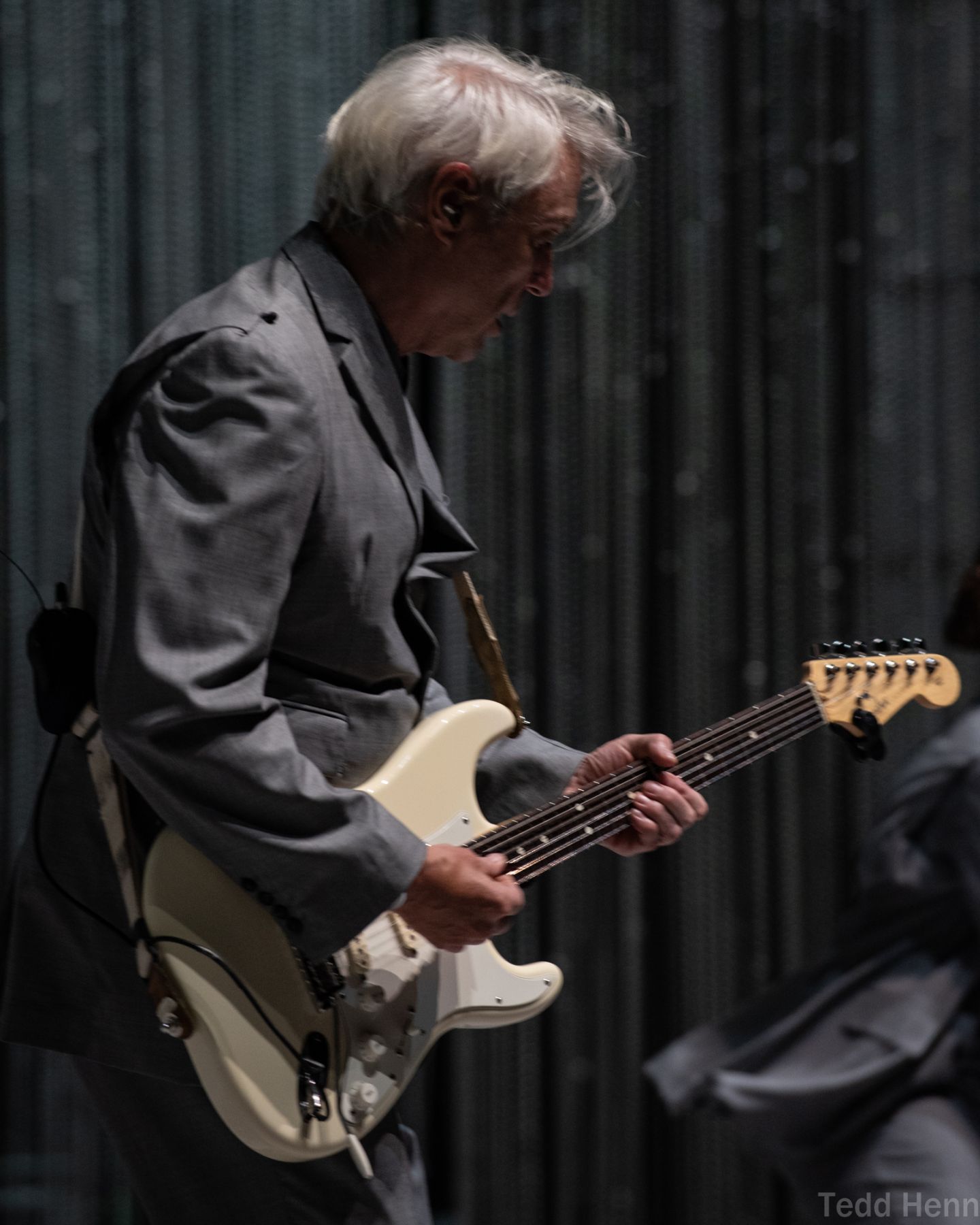 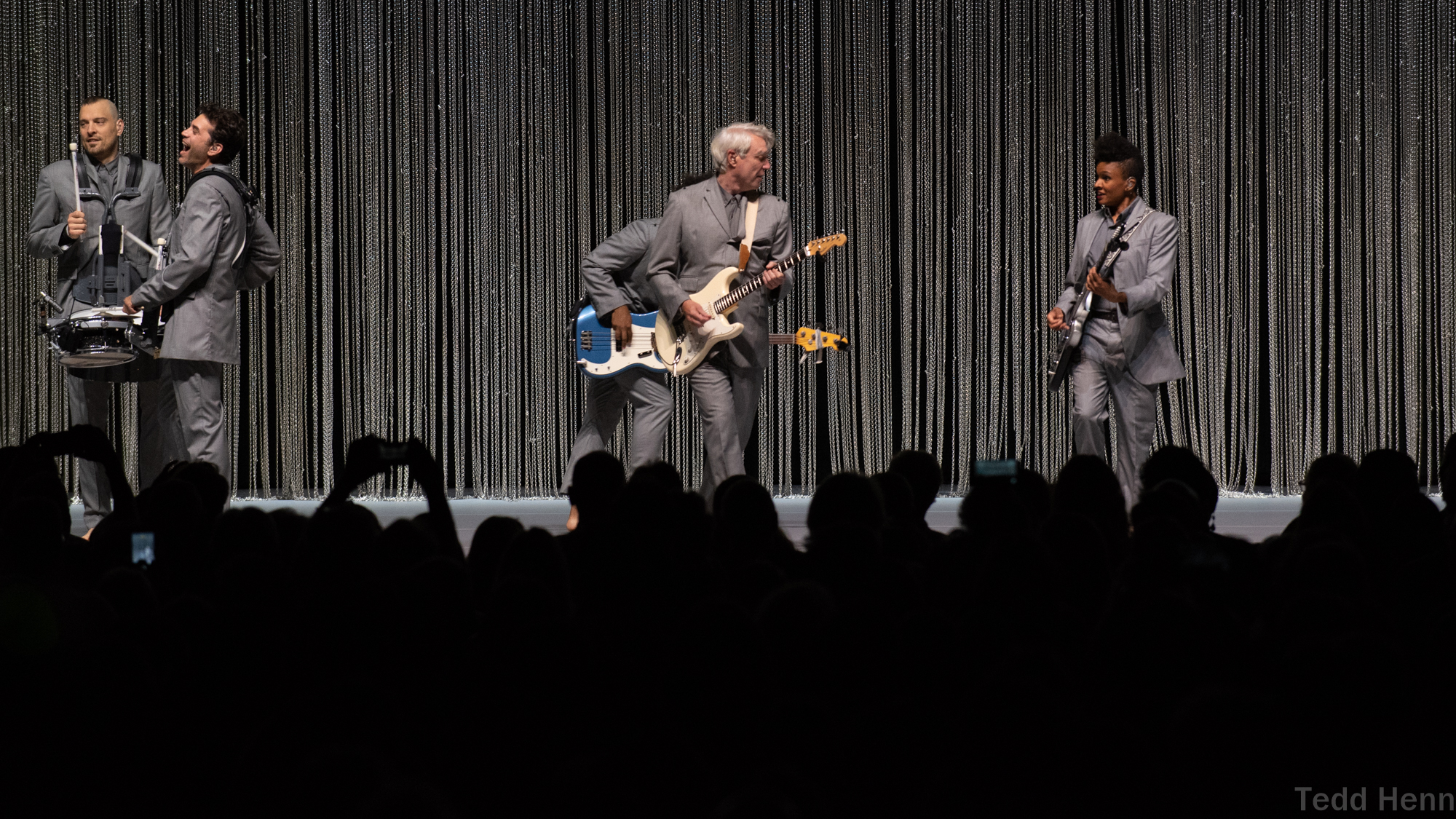 While DMB fans might recognize the song (Dave's been playing it live for a few years) - we finally have new studio tracks from Dave Matthews Band!

Samurai Cop (Oh Joy Begin) is the first single off the new album - Come Tomorrow - due out June 8th.

Song title sound familiar? Yes, Dave has admitted he named the song after the 'bad movie they were watching while writing the song'

But enough about that - enjoy the new DMB!  And if you haven't yet - get your tickets to see them at Jiffy Lube Live on June 9th!

We fell in love with Austrailian Singer Songwriter - Amy Shark - upon hearing Adore back in 2017 ... and now she's got another single from her forthcoming album - Love Monster - that we can't stop listening to.  Check out the video, that Amy co directed, for the song 'I Said Hi'

Bonus footage - here's a flashback to when Amy Shark played a WRNR Pop Up Show at Fado:

Jack White has been making the late night TV rounds recently (remember when he ruined a wedding on SNL?)

On a recent visit to The Late Show with Steven Colbert - Jack sat down and helped revisit some classic commercial jingles before performaning his new single - Ice Station Zebra ... Check out videos below -

We've seen a lot of crazy things at Foo Fighters concerts - guys wearing KISS make up rocking out with the band, Dave playing the show from a throne cause he broke his foot, heck - there was even a live Rick Roll with Rick Astley ... but one Dallas couple took things to the next level - and got married while the Foos played Everlong at a recent show at the Starplex Pavilion!

Congrats Belinda Marie Ramos and Tony Rosales - you're tweet says it all - Foo Fighters are the best choice for a wedding band!

Hey @foofighters big shout out for being the band at your wedding . Thanks a million to the staff at the starplex pavilion for helping our dreams come true #foofighterswedding #bestfoodayever #davegrohl #foofighters pic.twitter.com/ioq9Sunj4p