They've duked it out on Celebrity Death Match ... 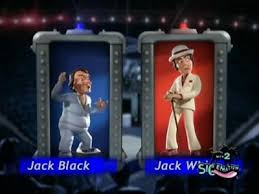 I just want a Jack White/Jack Black collaboration so it could be called the Jack Grey Project.

They both attended the 2006 MTV VMAs ... and Jack Black even  introduced White’s The White Stripes during a show in 2007 ... but there has never been any photpgraphic evidence of Jack White and Jack Black being in the same place at the same time ...

Both Jack's bands are on tour in Europe (White with The Racontuers and Black withTenacious D) and  at some point this  week, the pair ran into one another at a Tenacious D show it appears - based on the band's Instagram post - documenting the historic moment of two meeting (along with Tenacious D's Kyle Gass) ... Of course the comment was hilarious with The D decalring -  “We hired a new merch guy!”

We hired a new merch guy